Pupils are placed in families to learn English and the customs of civilized life.

1. Pupils must attend Church and Sabbath School regularly. Pupils of a certain denomination are placed with patrons of the same denomination when practicable. When Catholic pupils are placed with non-Cathoic patrons we are first assured that a Catholic Church is accessible. Non-Catholic patrons will in no way interfere with or forbid the attendance of Catholic pupils at the customary services of their church, such as Mass, Vespers and Sunday School. Patrons will adopt such measures and exercise such judicious authority as is necessary to facilitate the practice, by pupils, of their religion according to the tenets of their church. Failure by patrons to comply with these requirements, or attempts to proselytize will be deemed sufficient cause to justify the recall of pupils.

2. Absence without permission of patrons is not allowed, and being out evenings or away on social excursions Sundays, should be discouraged. Pupils should not go to Philadelphia nor to public parks unless accompanied by a member of the family or other responsible person.

3. Patrons or others must not hire pupils, nor are pupils to exchange places unless authorized by us.

4. Except when authorized pupils are not to return or be returned to the school before their outing agreement expires.

5. The use of tobacco and spiritous liquors in any form is forbidden. This and any other offence against good habits, the patron must report at the time.

6. When out for the winter pupils must attend school at least 100 days continuously, beginning not later than November 11, working out of school hours for their board, care and washing, unless otherwise agreed upon. Pupils are not to be kept out of school half days or detained in the mornings, but they must be punctual and regular in their attendance, and must study at home if necessary when their chores are done.

7. Pupils must bathe at least once a week.

8. It is the aim to send pupils out with a full equipment of clothing. Patrons will see that pupils take proper care of the same, and especially of their best uniform suits, dresses and other clothing, both as a matter of training and so that requests for additional clothing may be avoided during the periond out.

9. Monthly reports must show any violation of these rules, to fully, accurately and truthfully made out, signed by patrons and pupils and sent to the school the last day of each month. Pupils home letters, in all cases, must accompany the reports.

10. Patrons must not give pupils more than one half their earnings, and should encourage them to save more than the required one half. If they spend one half whle they are earning they have none to spend during school attendance, as one half must remain on the books of the school until their period of enrollment has expired. Pupils must give patrons receipts for all money given them, patrons to send such receipts to the School with each monthly report. The School will supply blank receipts, instead of request papers.

11. A record of all money transactions is kept at the School, and if patrons allow pupils to spend more than one half their earnings, the excess cannot be counted as part pay, but will be the patrons' loss.

12. Patrons are to pay one half the cost of railroad tickets, the other half, the pupil pays, and is to be counted as expenditure in calculating the one half allowance, and no monehy should be given pupils until the tickets are paid for. Pupils are well fitted out on leaving the school and will not need money the first month. Pupils on reaching their country homes, will at once give their return tickets to patons, who will forward them to the school promptly.

Patrons and pupils should carefully read these rules.We wlil not place pupils nor continue relations with patrons who will not in good faith subscribe to, and comply with their requirements.
These rules cancell all previous ones. December 8, 1900

NOTE: Three copies of this will be signed by all parties concerned, one copy to remain on file in the Superintendent's office, one to go to patron, one to pupil. 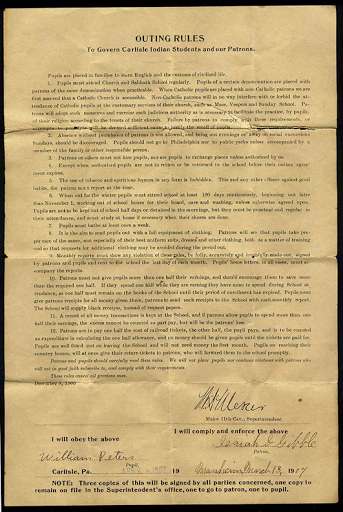