Paper by Aalok Bhatt in response to hearing the songs of Native American punk rock band, "Sihasin."
Posted by Barbara Landis at 11/17/2021 No comments:

18 Carlisle Indian School students enrolled with affiliation to the "Chickasaw" Nation according to the documents found at NARA and CCHS.  For digitized student files, enrollment cards or photos, go to CARLISLE INDIAN SCHOOL DIGITAL RESOURCE CENTER

This list of names, agency and home communities include parent or guardian information 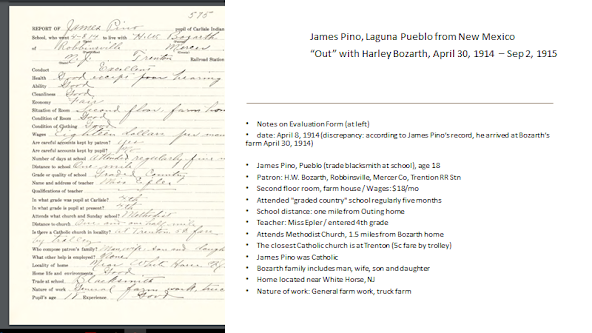 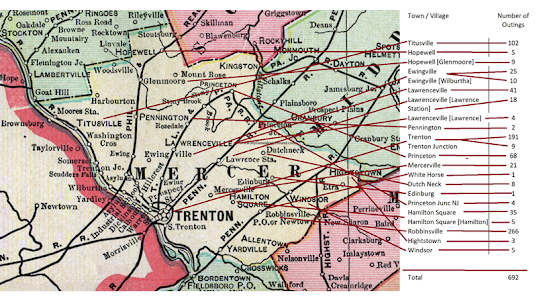 Looks like almost 200 farmers / business had Carlisle Indian School students in their employ / or were perhaps boarding them, in the Trenton area. There were 266 in Robbinsville and one of them was the greatest athlete in the world - Jim Thorpe (Sac and Fox). In fact, he lived with the same farmer twice for a total of over 18 months between between 1905 and 1907. 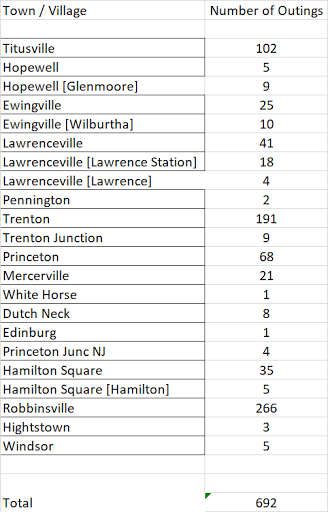 Numbers of Outings in PA broken down by counties 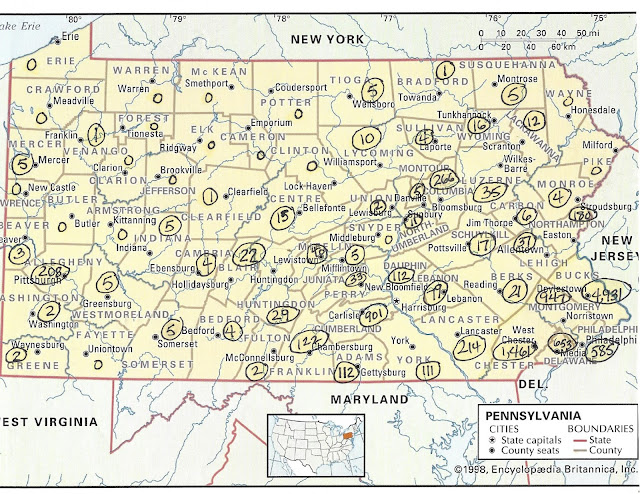 In 2010, I lost access to my original epix.net Carlisle Indian School web pages. These pages were developed in 1993, after a quick tutorial from my son, a computer software developer freshman at NYU. He taught me basic HTML code and I embarked on a steep learning curve in Indian boarding school studies.
Those pages introduced me to a huge network of Carlisle Indian Industrial School (CIIS) boarding school student descendants, researchers, writers, filmmakers and friends interested in the names of students. I spent many years during my free time, transcribing newspaper articles and answering emails from this on line network. This network supported and encouraged "Powwow 2000," the first major gathering of CIIS descendants to the site of the Indian School for two days of dancing and programs. This site facilitated the installation of a PHMC marker identifying the CIIS as the first off-rez federally funded Indian boarding school.
After the epix.net URL was purchased by Frontiernet, which in turn, was bought out by Yahoo in 2019 the pages have been floating in the ether with no direction. As soon as Frontiernet took over, I lost access to the pages. Passwords no longer worked and file transfer protocols were rendered useless.
The technical support people at Frontiernet couldn't negotiate the epix protocols. So these pages are still sitting out there, linked to an old email addy that no longer works, showing outdated events that have long since expired, and linked to student name lists by nations that one needed the URL's to find, since they weren't publicly linked out of respect for those nations who prefer their names not be readily available.
The purpose of these pages has always been to "get the names to the nations." 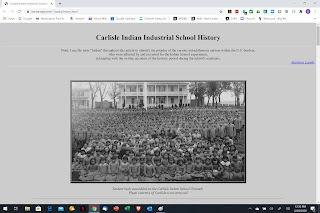 The history page (shown above) couldn't be updated or edited for almost a decade. Despite the presence of the pages showing up at #6 in google searches as recent as last night, the pages have just been floating around in the ether with no direction.
Now there is a new development.
My position as the Carlisle Indian School Archives and Library Specialist for the Cumberland County Historical Society (CCHS) has been abruptly axed - due to budget cuts. I had intended to migrate all my original web pages to the CCHS site but after spending time and frustration trying to make it work, I now realize that's not where they belong.
With a little help from my son, the pages are back!!
Go to https://carlisleindianschool.org/ and check it out.https://carlisleindianschool.org/
Posted by Barbara Landis at 6/23/2020 1 comment:

Slavery is not America’s Original Sin.

Both of these egregious sins had and have long lasting consequences.

Both of these egregious sins have been and continue to be erased or whitewashed in American children’s educational curricula.

Check the indices of our famous historians’ biographies of Abraham Lincoln for their entries on the murder of thirty-eight Dakota men in Mankato, MN the day after Christmas in 1862 on the orders of President Lincoln and you won’t find it. It was the largest mass murder in U.S. history before 9/11/2001’s world trade center attack. Say their names.

In my chapter, “The Names,” published in CARLISLE INDIAN INDUSTRIAL SCHOOL: SITE OF INDIGENOUS HISTORIES, MEMORIES AND RECLAMATIONS, I mention the power of naming as a form of exercising control over newly enrolled children from American Indian reservations.  As a goal to assimilate young people into the dominant culture, children were re-named to forever change them to fit in to a model U.S. society. 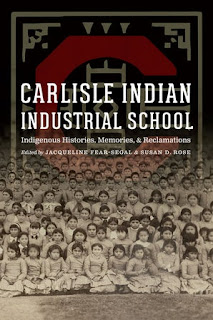 I heard a radio interview on NPR in 1999 with Nelson Mandela, who was making his lecture tour visiting universities in the U.S., part of his truth and reconciliation movement. When asked about how he felt being in America, he described America as a great country with one enduring problem: racism. When asked how America could fix its racism problem, his response was succinct: “Just listen to the stories and in the telling, just the telling – healing can begin.” You cannot fix the problem but if you can just sit and listen, healing will happen.

Nobody who needs to be heard gives a shit about your white guilt.

This is no longer about how white people might fix things. It is about hearing the stories of people of color who may happen to live in a country where they hear politicians, journalists and educators hearken back to the basic edicts of the “founding fathers.” Those very founding fathers are quoted every day – their intentions outlined with one basic omission. “We hold these truths,” if you are white. “All men are created equal,” if you are white.

We live in a racist country and it behooves every one of us to examine our own racist views. I submit that not one of us is free from racist tendencies. It creeps into our perceptions of strangers and acquaintances that are so subtle we hardly notice, and when we do notice, and analyze those thoughts, we often identify their origins as having come out of fear. And conditioning.

So, let’s recognize and admit our own inherent racism and move forward, Listen quietly to the stories of others. Understand by hearing “just the telling,” and remember them.

And say their names.